Saudi special security forces show their skills during a military parade at a base near Mount Arafat, southeast of the holy city of Mecca, on November 22, 2009  (Image credit: Mahmud Hams/AFP/Getty Images)

by Elbay Alibayov | Reflections on the week past

We are all defence and military this week. An arms deal with Saudi Arabia worth up to US$110 billion, followed by the Pentagon’s US$639 billion budget proposal for FY2018 (“dead on arrival” because apparently it was not big enough). And to complete it all, the NATO summit in Brussels.

All three security levels (country, regional, and global) are covered. An array of topics claimed to be targeted (from national defence interests to global threats like terrorism, to job creation) or flagged by independent observers as issues of concern (like civilian casualties and human rights). And this way or another, it is all about military spending; or, to be precise, about military spending (militarization) under the pretext of ensuring state and human security (eventually at the expense of other government expenditure). This is not a topic to be taken lightly—in the world of “limited resources and unlimited needs” we have to make (supposedly, rational) choices. Do we?

How much justified is, for example, US$1.69 trillion (which happens to constitute no less than 2.2 percent of global GDP) in military spending in 2016 alone? And this is at the time when according to Uppsala Conflict Data Program (UCDP), the same year the total number of deaths from violent conflicts across the world equalled to 103,330; of them 87,018 lives were lost in state-based violence; 9,034 in non-state violence, and 6,278 in one-sided violence. Add to this tens of millions of forcibly displaced people (both internally and refugees), those who are exposed to starvation and infectious deceases due to violence—and you quite get an idea of the scale of the problem. But to make sense of it, we first have to reflect on some basic questions.

How should we think about relationship between militarization and security, stability? How important is it to maintain high military spending (which includes items from procurement of arms and equipment to wages, training and social benefits to research and development)? How justified is it to cut public funding from non-defence areas in order to build up further militarization? And finally, does organized violence (whether state-based and non-state-based armed conflicts or one-sided violence) persist because governments don’t spend enough on security or the use of armed force is driven by other (social, economic, political, ideological, psychological) factors and cannot be contained by ever increasing military budgets? Or is it the arms production and trade (both formal and trafficking) that itself contributes to fuelling many conflicts?

There is no single or simple way to answer those questions. Especially considering that universal rules (like the one by Steven Pinker in The Better Angels of Our Nature that there has been an extraordinary but little-recognized, millennia-long, worldwide reduction in all forms of violence) are difficult to establish, and they may not necessarily work in all regions and at all times (especially nowadays, when the pace of developments and changes, and thus volatility are uber-high).

There are also different forms of conflict and therefore the relation between each form and external factors (like military spending) may vary greatly. Moreover, the forms are also changing. Take for example state-based armed conflicts—that is, armed contests over power and/or territory where one of sides is the government. The established classification recognizes four forms of state-based conflict (called wars if they cause more than one thousand battle-deaths a year): inter-state conflicts (between states); extra-state conflicts (between a state and an armed group outside the state’s own territory); intra-state conflicts (between a government and a non-state group); and internationalized intra-state conflicts (when the government, or an armed group opposing it, receives military support from one or more foreign states). Well, how are we going to categorize the wars in Iraq and Syria? For the majority of states involved, both wars fall under more than one sub-category, and each sub-category in turn is subject to a different set of driving forces, contexts and circumstances.

Another challenge (as ever) is causality. We first look at the correspondence, and if there is any, then at the casual direction in relations between (extensive) military spending and security. What I am interested in here is, whether it is true that more military spending by governments leads to sustained improvements in both state and human security (where human security is not only saving lives from war, genocide, displacement, epidemics and famine, but means freedom from violence and from the fear of violence, with direct and indirect implications on fundamental freedoms and basic human rights). To answer this question one has to undertake a full-blown research based on empirical evidence, and perhaps employing a sophisticated computation and modelling (to cover a broad range of variables over extended periods of time). However, it is possible to make sense of developments without this heavy armoury, simply viewing them in right context. 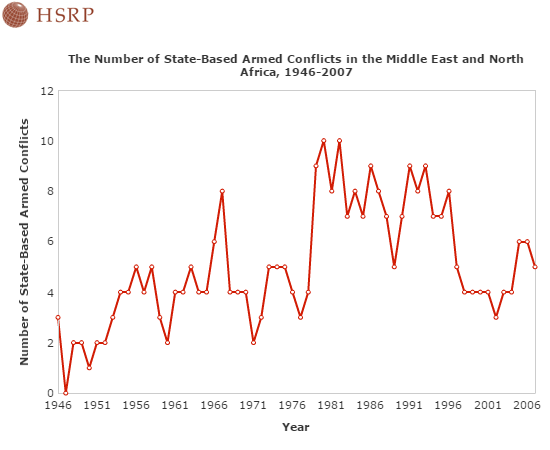 Take for example, the controversial arms deal between the US and Saudi Arabia signed this week. Let’s look first at the trend. In the last decade, the region’s governments have significantly increased their military spending, and weapons purchase in particular. In 2012-2016 their share among global importers of major weapons equalled to 29 percent, compared to (no small otherwise) 17 percent in 2007-2011. Out of top five arms importers in 2012-2016, three were from the Middle East and North Africa: Saudi Arabia with 8.2 percent, United Arab Emirates with 4.6 percent, and Algeria with 3.7 percent of global imports, respectively.

Note that this happens at the time when oil prices have dropped drastically and the global trend is leaning towards reliance on renewables and clean energy. The Gulf states being heavily dependent on commodity exports, find themselves in a dare financial situation. Never mind, they say. But the facts tell a different story: “Saudi Arabia faces an imminent economic crisis. … Riyadh cannot sustainably rely on oil as its principle source of national income. Over the last 18 months, the Kingdom has used 17% of its Public Investment Fund (PIF) to cover the government’s operating costs. If this trend persists, Riyadh will completely deplete the PIF by 2024.”

The true burden of military spending on the economy becomes apparent when we see it as a share of a country’s GDP: in 2016, in the Middle East it was at staggering 6.0 percent (compared to 2.0 percent in Africa, 1.6 percent in Europe, 1.3 percent in Americas, 1.8 percent in Asia). As mentioned above, this money is not spent out of some surplus magically appearing in the government coffers; it is spent at the expense/instead of something else. And this “something else” happens to be human, social and economic development. As pointed out by Stockholm International Peace Research Institute (SIPRI) in its 2016 yearbook, a comparison of trends in spending on the military, health and education since 1995 shows that whereas the majority of countries have increased health and education spending while reducing military spending, the trend in the Middle East has gone in the opposite direction. There is no better indication of where the governments’ priorities are.

Of course, there is also a game in play. Bluff is always present in politics, whether at local or global level. Saudi Arabia is in acute need of cash. The regime knows that they cannot afford large military spending. Actually, they have decreased the military expenditure last year, and as a result are not in the top third position of spenders, giving up this “honourable place” in the rankings to Russians. But they are also aware that others know that too, and are watching them closely. So the deal so ambitious is (at least in part) to throw dust in someone’s (say, arch-rival Iran—which happens to be on ascending line thanks to Nuclear Deal-incited release of sanctions—or would-be partners in emerging Muslim countries of East Asia) eyes. The deal is not binding and can stay stalled for years (until each letter of offer and acceptance (LOA) it is comprised of is signed and paid for thus making it to the contract), but will send a signal to anyone around that Saudis are in no short supply of money, resolve, ambition and support to this matter.

Whether the others buy this bluff is another story, but the point is made—and with such a skillful showman as Mr Trump in game, it is performed quite theatrically to impress everyone, at home and abroad. (As a side note, such a show with inflated package price serves the US administration’s goals too—to demonstrate to the voters at home their power and influence, to claim more jobs and benefits to economy etc; Vice Adm. Joseph Rixey, director of the DSCA was quick to announce: “When completed, it will be the largest single arms deal in American history.”  What an accomplishment!)

Still, this does not change the overall intent of the affair. And just to be clear on that point: the rulers of Saudi Arabia will make sure to purchase big part of the arms package, especially considering that first, it is a political commitment before the strategic partner (who is so kind to take sides in the ages-long Sunni-Shi’a power contest); second, the delivery under contracts may take long years thus allowing some flexibility with regards to payments; and also, Saudi rulers want to build the military production capabilities at home by 2030, so part of contracts would work to this end.

That is all good, but the question is who will pay for this. Well, I have an answer: I assume this would be the young generation of Saudi Arabia (who are already frustrated by worsening life standards, unemployment and various barriers in social life) and of other countries in the region (who are either equally robbed by their governments of public investment in their future or are unlucky to be born in the neighbouring countries which serve as playground to use those weapons purchased). Whether they like it or not. 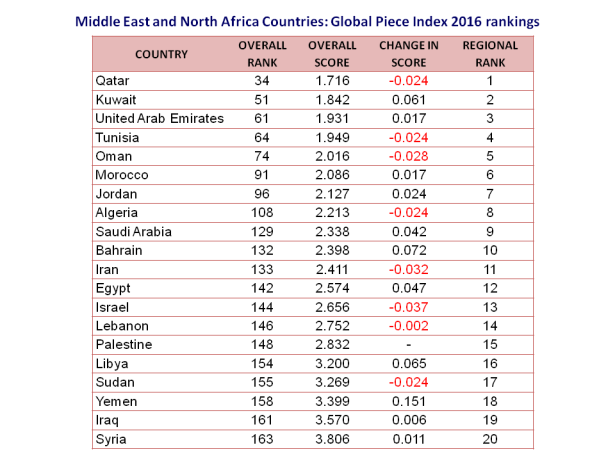 Where is it all heading? Marc Lynch has nailed it in his recent article that, emboldened by such deals (and the Washington’s backing) the region’s regimes will find it easier “to sustain their crackdown on civil society and political dissent” when faced with difficulties and popular resistance to meet the militarization commitments, “but such repression will exacerbate the governance failures and political grievances which lay the ground for another round of instability. By almost every indicator—economic, political, security or social—the Arab regimes upon which Trump is doubling down are more unstable now than they appeared to be in the years leading up to the 2011 uprisings.”

So in response to the question posed in the opening part of this piece, it would be fair to say that militarization (through extensive military spending, among others) makes the Middle East governments more vulnerable and the entire region increasingly unstable—it encourages violent conflicts and contributes to their escalation instead of containing them. It is counterproductive, whether in immediate or long term. And I am sure we will arrive at similar conclusion when analyzing other regions. Think of Africa (military spending across the continent has increased by almost half in the past ten years). Think of South Asia (with the top importer of major weapons, India and no less ambitious Pakistan). Think… how much good could have been done instead.