Contrary to prevailing narratives and misconceptions about Afghanistan (which tend to see the current conflict through the narrow frames and uprooted from local contexts), what we witness is a dialectical rivalry inherent to any evolutionary process, be it a lively organism or human society. Depending on the object and its environment this rivalry may take many forms, names and forces striving to outdo each other—all coming in the end to a contest between old and new, decay and regeneration, an outward and inward looking perspectives of the future, between adaptation to the changed circumstances and conservative resistance to and obstruction of the change. Afghanistan is no exception; the dominant rivalry (and thus conflict) here is taking place within its established (and ever evolving) social institutions. The only problem is that it has taken extremely violent forms countrywide, this time round.

The current cycle of this eternal and profoundly dialectical competition in Afghanistan has been inspired by the forces equipped with and aspired by the notions of modernisation and traditionalism. It has at least a century-long history in this country, counting approximately from the date of earning its independence and coinciding with the similar global processes of the twentieth century. The process is following its own logic and dynamics (with highs and lows, and differences and time-specific nuances and those owing to the locality and its population or institutional arena where the contest occurs), being occasionally interrupted or intensified due to external interferences (most prominently, by the 1979-89 Soviet occupation and the post-2001 US-led one).

Both modernisation and traditionalism shall be taken with caution: I use them as terms referring generally to the forces advocating, respectively, for reforming the society through more integration with the world (politically, technologically, culturally) or preserving the ‘purity’ of traditional values, style of life, and political institutions while keeping the exogenous influences to minimum.

This is an inherently political process, and as such does not limit itself to academic discourse but aims at the heart of politics—contestation and exercise of power. This kind of rivalry is never settled ultimately (although a means to achieve it may change over time) and those time-sensitive balances established at certain junctures may be coercive or consensus driven and based on mutual compromises. Anyways, they will be continuously contested and revisited, and new balances established (whatever shaky or fixed) along the way, just to be challenged by new generations.

I will summarise below the major phases of this century-long contest in Afghanistan. It has been undertaken by agents—those who hold the ideas and act upon them. Their actions occur through various structures—geographical, political, economic, social, and ideological. It should be noted that this distinction is conditional, as the structures and institutions overlap; moreover, a change initiated in one structure often-time expands to other structure(s) in an ultimate struggle for power. For example, changes aimed at modernisation of education (social structure) would easily spread onto ideological structures in a country like Afghanistan, where education is intertwined with faith and patriarchal worldviews. And here is the essence of this traditionalism vs. modernisation (or any other) political contest—it aims at power which takes different forms under different structures, but all the same, it gives to its owner the ability to impose their ideas on the opponents.

At different times, the proponents of modernisation in Afghanistan ranged from authoritarian rulers to moderate or progressive urban parties to communists—each with their own understanding of the direction, targets, and the scope and the pace of reforms. Similarly, traditionalists is an umbrella term for conservative forces acting at different times and localities alone or in concert such as tribal heads and elderly, representatives of other privileged societal groups, as well as clergy and especially fundamentalist preachers, Islamist parties. It is very important to specify what was meant under each direction at any given point in time, as it makes clear what was actually contested and by which individual and group agents, and how it was supported or rejected by different groups of population. This, in turn, determines in many ways why certain initiatives have been successful while others failed—an important lesson for those involved in the Afghanistan politics. 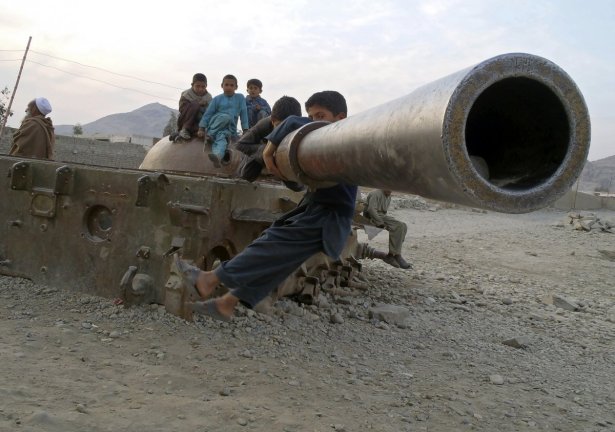 Children playing on the remains of a Soviet tank, Jalalabad, 2013 (Photo: Rahmat Gul/AP)

I tried to draw the summary of major phases in the rivalry (or conflict) between the outward looking modernisation and inward looking traditionalism in Afghanistan as a map—pointing to key characteristics with regards to structures and institutions where the contest has been unfolding, central ideas promoted by the agents, the rules by which they played, and the outcome of it. This map is a starting (or reference) point for the analysis. It helps understand the Afghan political contexts in their historic development over the past century, draw comparisons and, more importantly, make sense of the current developments (what works and what does not, with some hints on why it occurs as it does).

In the next piece of this series we will look at the sequence of random events occurring as of recent and how they are interpreted by the agents, in order to reveal whether they offer windows of opportunity for both the Afghani and foreign actors on all sides of the contest to move into the next (hopefully less violent, more constructive) phase.

This is the second part of In Search of National Identity: Afghanistan’s Enduring Rivalry. See Part I: Prevailing narratives

One thought on “(II) In Search of National Identity: Afghanistan’s Enduring Rivalry”